As a specialized pelvic health physical therapist in the United States for the last twenty years, I have heard this comment so many times. The clinical evidence from research is now published in journals for urogynecologists, physical therapists, urologists, as well as for obstetricians and gynecologists, supporting the need for assisted pelvic floor recovery after childbirth. Just recently Dr. Ingrid Nygaard, a urogynecologist at the University of Utah, wrote an editorial in the March 2015 Journal of Obstetrics and Gynecology describing pelvic organ prolapse (POP), which does not typically develop to end stage until decades after vaginal birth. This morphological change can be affected by performing exercises to facilitate closing of the pelvis and regaining more stiffness of the muscles and connective tissue.

In order to understand how pelvic organs descend, a woman needs to understand the remarkable pelvic floor muscles and connective tissues that form a trampoline-like mat in the lower pelvic region. This tissue offers a certain level of stiffness to hold up the pelvic organs so they can function optimally, and accommodates varying degrees of intra-abdominal pressure when laughing, coughing, sneezing, or exercising. Holding your breath, known as performing a valsalva, places  pressure on the pelvic floor which can initially create hypertonus,(too much contraction), or pelvic floor relaxation from fatigue. A certain degree of stiffness of the tissue must be achieved otherwise the load from above due to increased pressure in abdomen when having a bowel movement, delivering a baby, excessive weight gain, or exercise can cause a descent of the pelvic organs. When a pelvic organ descends, women often complain of a bulge in their vagina or a deep lower pelvic pressure.

The structure of the pelvis also changes during pregnancy due to pregnancy hormones. During the 21-38 weeks of pregnancy, the pelvis opens in preparation for birth. For some people whether due to genetics or an easy non-stressful birth the body snaps back. But for 27% at six weeks the tissue was not recovered, and at 6 months 15% had a larger opening than the normal of 25cm2. An analogy would be a woven cane chair that no longer offer good support when someone sits upon it, but that it sags in the middle. As we examine our physical bodies, it is possible that women have muscle variations and differ in mechanical stretch that their connective tissue can withstand. Previous research illuminates for us that torn muscles can heal. 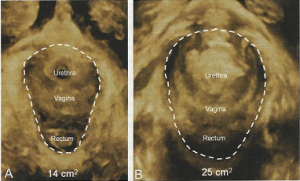 The call to action to help prevent prolapse is to rehabilitate the pelvic floor muscles during the postpartum period. Most muscles significantly change in six weeks, but depending on how stretched the muscles became or trauma from decreased blood supply, a longer period might be required. The body is magnificent in changing during the childbearing year. Just like recovery from a strained muscle in sport, pelvic floor muscles appear to respond well to rehabilitation post birth in an effort to regain form, and isolated function as well as coordinated and proper timing of function with the other deep trunk muscles like the back extensors and transverse abdominus, while coupled with exhalation. With the research that is now being published there is no reason why a woman should not know what happens to their pelvic floor during birth and how they can regain the best function possible.

To learn more, you may visit our website: obgyn-physicaltherapy.com

One thought on “Why Didn’t I Know . . . that I could help prevent prolapse and incontinence?”

This site uses Akismet to reduce spam. Learn how your comment data is processed.